- October 12, 2017
Knock on wood, avoid the cracks in the pavement and keep your fingers crossed as it’s that time of the year again. That’s right, coming up is Friday 13th… 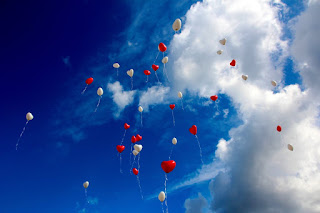 Paraskevidekatriaphobia or Friggatriskaidekaphobia is the official name for the phobia of Friday 13th. Fears surrounding the superstition are also surprisingly common, in fact new data reveals that 49 million Brits dread the date.

The history and origins of Friday 13th fears are widely debated, however, two examples are consistently referenced. The first, is that Jesus Christ was crucified on a Friday and Judas Iscariot who betrayed Jesus was the 13th guest at the Last Supper.The second event, dates back to 1307 when King Philip IV of France commanded for hundreds of members of the Knights Templar to be arrested, they were then tortured and burned alive!In the modern day, superstitious people believe that Friday 13th brings bad luck to employment, finances and even love. Dating and relationships can be affected which is proved by the many celebrity breakups. Michael Chopra and Heather Swan married on Friday 13th and argued throughout their honeymoon splitting only a few weeks later.The devastation of divorce has also occurred on the unluckiest day of the year wreaking havoc on celebrity relationships. After ten years of marriage, Bill Murray and Jennifer Butler finalised their divorce on Friday 13th. Johnny Depp and Amber Heard’s marriage also ended on a Friday 13th after months of arguments.So, with cases like these is it any wonder that we don’t want to tempt fate with our love lives? 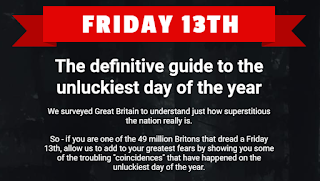 The Dating Guru, James Preece, has noticed the connection between love and superstition throughout his career as a Dating Coach and Relationship Expert. He said:“Everyone has their own little quirks and beliefs. I’ve had dating coaching clients who only want to date singles who are a certain star sign. Or they think that they will jinx the relationship by taking certain actions.”James Preece also noticed that he had a lower turnout to his dating event on Friday 13th: “I once tried to run a singles event on a Friday 13th. I hadn’t really given it much thought until I realised ticket sales were low....Rather reluctantly a few did admit to me that they didn’t fancy attending due to the date.”He added: “This wasn’t just because they thought they’d be unlucky but also due to them not wanting to travel at such a risky time.”
So if the thought of Friday 13th makes you tremble, we’d recommend you hole up inside with a cup of tea and some biscuits...day off anyone? 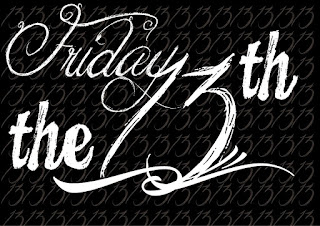 If you prefer a risk free Friday 13th, why not book the day off and hole up inside with your loved ones?
friday 13th friday the 13th Friggatriskaidekaphobia love Paraskevidekatriaphobia superstition

Today I thought I would share with you my experience baking Tanya Burr's infamous cookies, and tell you how I did it along the way if you are unfamiliar with the gorgeously gooey circles of delight's recipe.
You will need:
75g of cocoa powder A dash or two of milk, depending of how dry your mixture seems to be 300g of caster sugar 275g of self raising flour 200g of butter A large bar of white chocolate A large bar of milk chocolate One large egg

Method:
Preheat your oven to 200 degrees Celsius. Cream together your butter and sugar in a large mixing bowl, before cracking your egg into the mixture. You then want to stir in all your dry ingredients. At this point you want to add your milk if the dough is looking dry. After this, you want to break all your chocolate up into the squares and chuck it in. (And eat a piece or two - of course!) Start using your hands to form a dough, and when it is all combined, you can put in on a surface and separate it into rather large balls, ready …
Read more 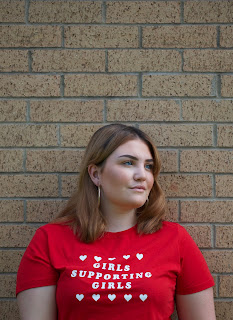 And then last month, I read a book.

It was called "When we collided".

And it said what I have been trying to say, for this past year.

"That's the thing they never tell you about love stories: just because one ends, that doesn't mean it failed. A cherry pie isn't a failure just because you ate it all. It's perfect for what …
Read more